The Openings of this Moment

Just one month ago, the country both ushered in and rejected a new president. Maybe you watched at home on a major network, protested the inauguration in disgust and self-love, or maybe you found yourself in DC in disbelief, like I did.

I joined the #RootsofResistance delegation that included our partners Grassroots Global 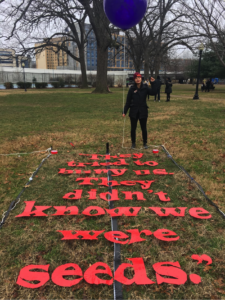 Justice, Indigenous Environmental Network, Right to the City, and Climate Justice Alliance to disrupt Trump’s inauguration. Among the masses of red “Make America Great Again” caps in DC, we unfurled our 60-foot banners at the front doors of the Department of Energy and Housing & Urban Development to foreshadow our future–when housing is a right for all people, and when we are free from resource-extraction wars, oil pipelines, and pollution in our water, land and air. We were one of many actions to unveil the real impacts of Trump’s presidency. Local organizers blockaded entrances to the inauguration march with intentions for our present and future – Free Palestine, #NoDAPL, Workers United, and Black Lives Matter.

Together, we made it clear to the country that we are the roots of the resistance – we are on the frontlines of poverty, pollution and racism. We are the defenders of water, land, and our homes. Women of color led our delegation, and we bring the the following lesson to Trump’s inauguration and what’s to come:

When history has tried to divide our communities, told us to hate and fear each other, it is the women who brought us together. They taught us that love was not something to mistrust, that we must fight for each other instead of against each other. A feminist world is a better world for all.

In the first month of his presidency, Trump has actively exceeded our every fear. He has appointed ill-equipped, corporate billionaires to lead federal departments with an agenda of destroying constitutional rights, affordable health care, public housing and education, and our earth. He has enacted Islamophobic immigrant bans and triggered ICE raids across the US. He cleanly excised the department heads and laws that defend our rights. On Day 1, “Climate change” became “America First Energy Plan.” “Civil rights” became “Standing Up for Our Law Enforcement Community.” The ties between capital, extraction, and exclusion are clear. Trump is the catalyst for millions of people into action, on both the Right and the Left.

This moment demands that we rise up boldly to project how our futures need to look. Queer and trans people of color, working women of color, Black, Indigenous and Muslim folks will lead us on the frontlines. We, on the frontlines of poverty, pollution, white supremacy, and genocide, have the wisdom and expertise to build a future that includes everyone. We need to be ungovernable. We need to build our emergency rapid response and deploy it when lives are on the line. We need to build power to sustain ourselves and expose the true culprits that are polluting our livelihoods. We need to think bigger, act bolder, with more connectedness, imagination, and faith that we can create the future that we all need and deserve. We can afford nothing less.

APEN will remain committed to our communities on the frontlines of all that’s to come. We will make meaningful progress for justice, and we will be resolute in our resistance.