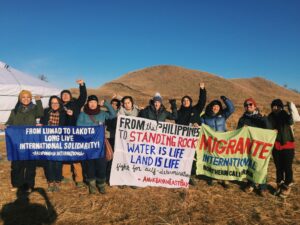 We traveled to Standing Rock to be in solidarity with the Standing Rock Sioux Tribe water protectors, who are fighting the unjust and unsound Dakota Access Pipeline–and have been resisting cultural and ecological destruction for over 500 years. We went to help and bring supplies for the hard winter. We came back with renewed hope and fire to fight wherever our front line may be. It was a humbling and transformative journey for our delegation. 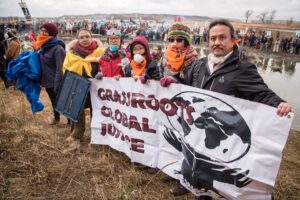 We were part of the massive community of an estimated 7,000 to 10,000 people, who came to fight against an oil pipeline that will destroy sacred lands and pollute water. We camped in icy temperatures, under floodlights, on the land in the path of the pipeline and heard the planes, helicopters, and drones monitoring our resistance. We also witnessed water protectors creating communal structures – a medic hub to care for people’s well-being in all healing traditions, multiple collective kitchens to nourish the camp, community meetings to distribute information, vibrant art production centers, and more! We prayed with indigenous elders, youth, and water protectors who are building a powerful spiritual movement. We participated in actions to reclaim sacred sites that never should have been colonized in the first place. 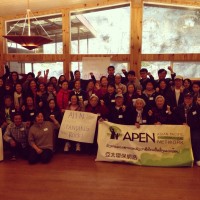 APEN Oakland Leaders, Richmond Leaders, and Staff stand in solidarity with Standing Rock and against the Dakota Access Pipeline

As organizers working with community members on the frontlines of environmental justice struggles, we see the connections to our fights in Oakland and Richmond for a just transition to a healthy, living economy. As people coming from immigrant families, we recognize the militarization and forced displacement by U.S. imperialism that is also part of our family histories, as well as our own participation in the settler colonialism of native lands. We are part of the movement at Standing Rock because we believe that the human need for culture, water, home, and self-determination are worth fighting for.

We are grateful to be part of our larger APEN family who stands with Standing Rock and the national Grassroots Global Justice and Climate Justice Alliance, who organized the “Honoring 524 Years of Resistance” delegation. We are thrilled that all the organizing of Indigenous Environmental Network and water protectors has pushed the US Army Corps of Engineers to deny the easement for the pipeline on Sunday, hitting the pause button until further study. 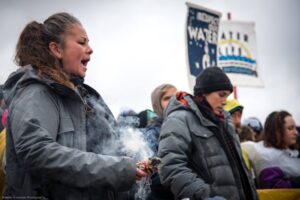 This hard-won movement victory is amazing, and we still need to continue the struggle. There is still a possibility that Energy Transfer Partners would illegally drill anyways and opt to pay the penalties. Trump, who has investments in the project, can do a host of things when he takes office. The Obama Administration approved other pipelines even while acknowledging the people’s voice on #NoDAPL. The movement to #KeepItInTheGround and transition from the extractive economy will keep resisting. Beyond government concessions, we fight for justice and deep democracy.

“We can continue the work we’ve been doing, because it’s all still relevant and helpful, and will become quite urgent again in at most a few months. We can go after the banks harder than ever to cut off funding to DAPL. We can continue to spread information, lobby elected officials, lobby the Corps, hold events, train for direct action. We can engage in the EIS process once it begins. This isn’t the end of the fight by a long shot, but it’s a brief respite between battles and a sign of how far we’ve come thanks to the indigenous leadership and water protectors at Standing Rock. Let’s celebrate and reflect and keep fighting. #NoDAPL”

3. DIVEST FROM THE BANKS INVESTING IN DAPL: A key strategy in the Standing Rock struggle has been nationally dispersed actions to shut down the banks that are funding DAPL and close your personal accounts at these banks. Here is an article from YES! Magazine that lists the banks and contact information.

4. PRESSURE POLICE DEPARTMENTS TO PERMANENTLY WITHDRAW FROM STANDING ROCK: This is a clear case of human rights violations. You can contact the police departments here.

5. KEEP PRESSURE ON ENERGY TRANSFER PARTNERS AND SUNOCO to comply with the law and complete a full Environmental Impact Statement. Stay tuned for more updates about this strategy.

Thank you for taking a stand for Standing Rock!